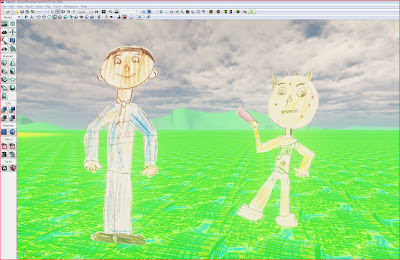 Last weekend I started adding my kids pictures into a UDK as we have plans to make a simple game, collecting items and battling trolls usual sort of stuff. I downloaded the latest beta for Adobe Photoshop 6 draw a path around each character, made it into an alpha channel and saved it out as a tga 32bit to keep the alpha.

I've not really played with alphas and transparencies in UDK but my idea was to create a simple plane, stick the texture onto the plane and that'll do me. Although it was a bit more trial and error than i had imagined I finally got there (see pic)

For the texture I used compression for TC_OnBitAlpha and for the material I plugged rgb into diffuse, alpha into Opacity then set the Material / Blend Mode to BLEND_Alpha_Composite. This seemed to work fine until I noticed the translucency in the sea material was cutting through the 'prince' material, so back into the material for a bit more tinkering and Misc / Enable Separate Translucency seemed to do the trick.

So, everything seemed to be going well, I imported a couple more textures, created materials and left it for lunch. When I came back I reopened my UDK level to find all the newer textures had gone.

I tried and retried and managed to replicate it every time, I even imported static meshes but everytime I closed and reopened my level they were gone.

Being the dog with a bone type, I added a new level saved it various places, I eventually reinstalled Feb edition and then March just to be sure and every single time I got the same results.

I took it to the forum and checked everything anyone suggested to be sure, then I realised it had something to do with saving the current level verses saving the package.

I separated my textures and materials into their own package and it saved and reopened fine. Pretty much just as I did JetFire left me this gem

"Looks like if I import a texture and don't use it, it gets lost? < this, if you're embedding assets into your level file, rather than a separate .upk- If not used in the scene they'll get wiped. So, either use them, or put your stuff into separate upk's which don't have this feature."

So there you go, use or you lose.

I'm going to have a textures_materials package from now on.

Posted by cheesewhisk at 5:32 AM